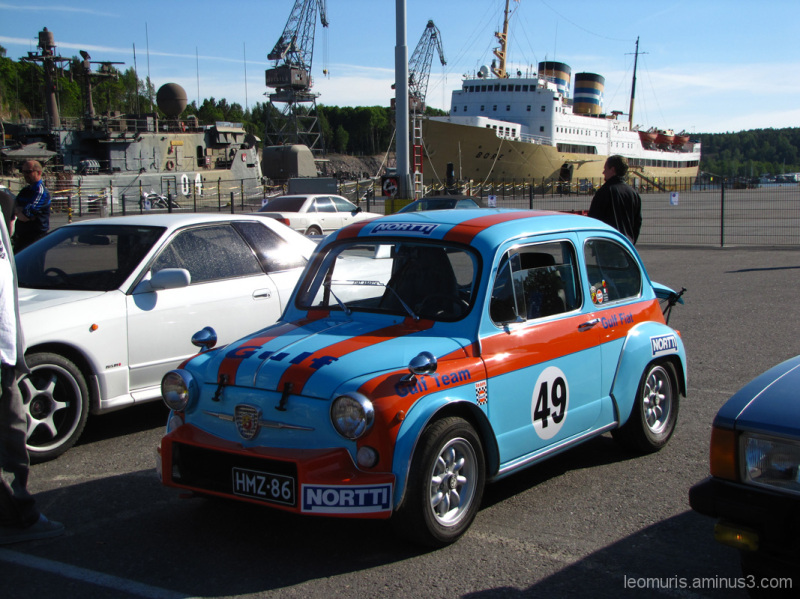 Posted by Jypyä Pop (Turku, Finland) on 14 June 2012 in Lifestyle & Culture and Portfolio.

The old race car is described in the Maritime Centre Forum Marinum parking place,. In the background are displayed museum ships Karjala and Bore. Karelia is Finland's former naval gunboat, which is a museum. Bore was built in the 50th century, between Turku and Stockholm traffic. Later, it toured the cruise almost the entire Western Hemisphere. Now it is a museum and hotel in a ship in Turku.

The Mouse from Glasgow, United Kingdom

What a great collection, the Fiat is a beauty

@The Mouse: Thank you.

So much work has gone in to that little car.

@Nigel: I agree. The result I think is fine.

Beautiful color contrast between the Fiat and the rest of the elements which compose the image of the port. Very good achievement. Greetings.

Excellent composition and the colourful Fiat makes an interesting contrast to the museum ships.

@Stephen: Fiat is also quite old. License plate that sometimes it is registered in the 70's. Nortti is a tobacco advertisement that was banned in Finland in 1978.

That must be the most complete transformation of one of those little Fiats to be found ! Strange thing is, it looks completely competent and ready to go !

@Ronnie 2¢: It is quite functional. I saw it arrived. Sound was a part of, like sports car should be.

@Martine: Then we are least two, which think same way.

@Nicou: It was very beautiful evening. It was nice to walk and look human's life and their hobbies, like this car.

@Leigh: I like old cars, old motorbikes. That old car is much younger like me. It is not problem, because is fun remember when that car was new.

yo from Ile de France, France

Cool! What a beautiful, little car!

I really like this beautiful little Fiat !!! Nice shot ...