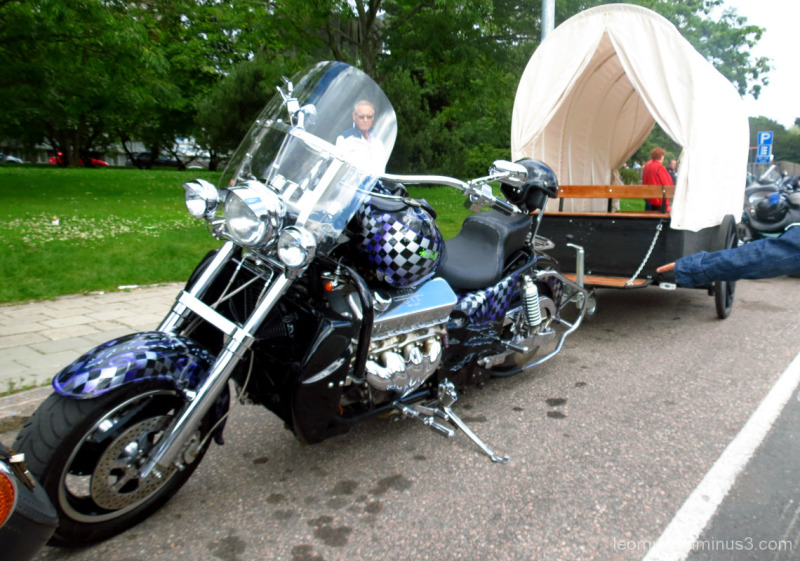 Posted by Jypyä Pop (Turku, Finland) on 3 August 2015 in Transportation and Portfolio.

On Saturday it was in Turku Harley Davidson owners' meeting. This was a most unusual combination, which I saw. Great deals on motorcycles were many and their parade of handsome semi-transparent and, of course, television. There were nearly 200 motorcycle. Engine exhaust series, judging that a motorcycle engine was a V-8, so apparently it No strength to pull a little larger load.

Very beautiful composition and trailer "wagon" impressive. Excellent shooting, I like a lot.
Have a good week.

This makes me smile! How clever! Excellent image and point of view

Quite the "horse" pulling that covered wagon.

@Steve Rice: I agree. The power does not immediately stop.

@Baldwin VW: It truly is... Thank you

Does it come with the little woman in the orange jacket looking out the back? She'd be a handy lookout in heavy traffic, but if they made a lot of these wagons, they might have a hard time finding enough small women.

@Harry: The persons shown in the image are over to have passed. As a driver of the vehicle was a pretty big sized guy. I did not see one of those wagon ride.

THAT is a fantastic idea !! I would love to follow the Davidson in that cute back cart!